The store will not work correctly in the case when cookies are disabled.

Our webshop may not work optimally in your browser, Internet Explorer. We advise you to use Firefox or Chrome for an optimal experience.

What different types of cargo bikes are there?

The Long John: a cargo bike with 2 wheels and transport box in front 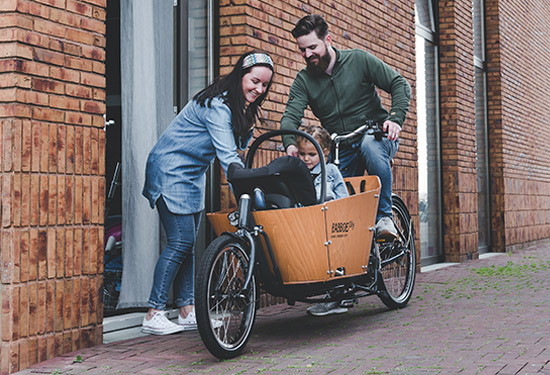 Do you have a larger footprint available or prefer the greater stability of a three-wheeled cargo bike? Cargo trikes usually offer generous storage space. The Babboe Big cargo bike is a large cargo bike that can transport up to four children. The three-wheeled Babboe Curve also belongs to the category of large cargo bikes. Both models are also available as e-bikes, letting you move quickly and comfortably despite heavy loads. Last but not least, our absolute bestseller in terms of innovation and design: the Babboe Carve. The best of both worlds: the stability of a three-wheel cargo bike combined with the agility of a two-wheel cargo bike. The ‘carve mechanism’ lets the box tilt with the bike when taking corners, so it feels as if you were riding a two-wheeler. Fun for all the children is guaranteed!